Who is Gerald R. Flurry? 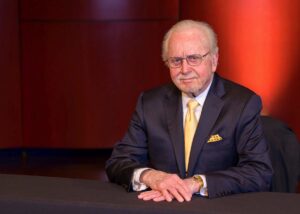 He is also presenter of the Key of David television program which airs all around the world and on radio. He has been an ordained minister for over 40 years. He is also chancellor of Herbert W. Armstrong College and chairman of the Armstrong International Cultural Foundation.

Gerald Flurry was ordained a minister in the Worldwide Church of God, which was founded by Herbert W. Armstrong. While in the WCG he was the pastor for the Oklahoma City and Enid, Oklahoma, congregations. He was excommunicated on December 7, 1989 for resisting extensive doctrinal changes that moved away from the example set by WCG founder Herbert W. Armstrong.

Gerald Flurry could see the disconcerting changes occurring before most realized they were happening. He wrote Malachi’s Message to make the changes known to the WCG ministry and, secondarily, the membership. Gerald Flurry and his assistant John Amos were fired after a draft of the book was presented to the WCG administration. He immediately founded the Philadelphia Church of God.

Since then Mr. Flurry has preached the wonderful news that Jesus Christ will return to save mankind in this generation. He also delivers a warning message related to the doctrinal changes in God’s Church.

Gerald Flurry and The Key of David

This is primarily done through Gerald Flurry’s television program, The Key of David, which airs on over 200 stations all over the world. It reaches a potential audience of over 400 million viewers.

He began The Key of David in 1993; it originally started as a radio program called God’s Future World. His 30-minute program explains world events in the light of Bible prophecy. Programs include: “The America-Europe Financial Crisis,” “Putin Remembers Yugoslavia,” “Why Most People Don’t Understand Bible Prophecy“ and “The Ultimate Key to Success.”

The Philadelphia Trumpet magazine is the other major outlet for Gerald Flurry’s message. You can find his broadcasts and articles at theTrumpet.com.

If you’d like more information about Gerald Flurry and what he teaches, you can learn more at the Philadelphia Church of God website.