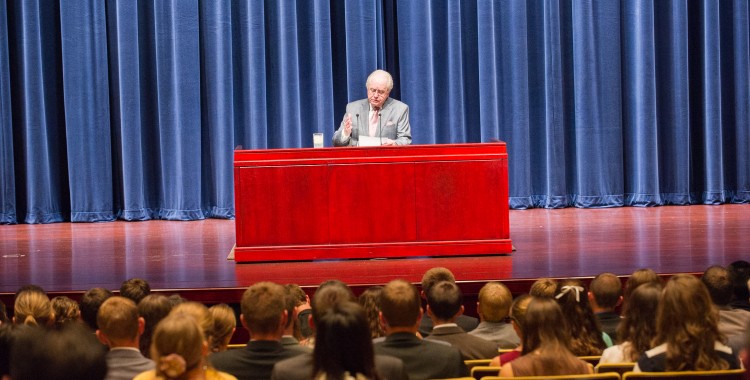 Gerald Flurry, Chancellor of Herbert W. Armstrong College, addressed the student body on August 17, 2014 at Armstrong Auditorium in Edmond, Oklahoma in an orientation lecture for the academic year. Gerald Flurry uses these lectures every year to focus students on the education they receive at HWAC. This year, Mr. Flurry went into detail about William Shakespeare and the British Empire. He used it as an example to show how to achieve success.

Gerald Flurry then went on to talk about William Shakespeare and the significant role he played for the British Empire, established a strong foundation for English literature, and was the poet the Empire needed.

When asked about the lecture, Gerald Flurry said, “What I was hoping for the students to take from it is: You’ve got the greatest scholar who ever lived, and he really was an empire-builder. I think God influenced his development so it would give the British people every opportunity to deliver the message about David’s throne. It’s not just about education. It’s about building an empire. If you want to be in that business, you need a great education in vocabulary and communication.”

Shakespeare’s influence on English literature is something that cannot be underestimated, especially when you consider how much influence it had, and still has, on Western education. Shakespeare’s work helps identify the greatness of the British Empire and draws the world’s attention on Britain’s heritage as something extraordinary.

Throughout his lecture, Gerald Flurry went on to emphasize the importance of proper education and its absolute importance for achieving goals in life, “I was hoping this would make them realize how important this education is. If they want to fulfill their goals and ambitions, they have to be serious about education.”