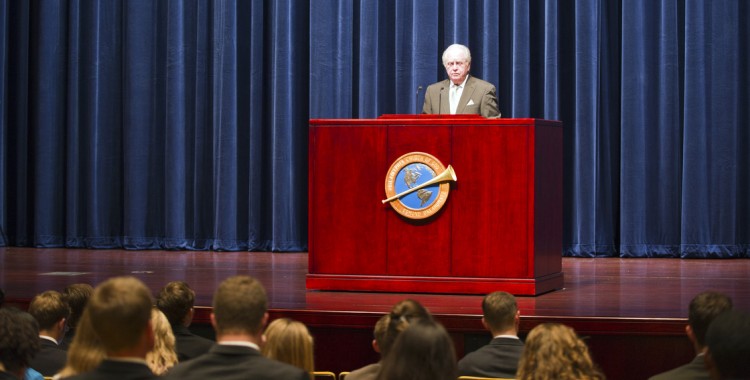 Today, teachers tell students that history is simply the unfolding of inevitabilities, that no one person can change its irresistible tide. Many American universities don’t require students to take even a single class on history. This is one major reason why we are not developing leaders today: We are not bothering to learn from the great leaders of the past.

Students at Herbert W. Armstrong College, however, learn the value of understanding the past and the effect one person can have on others and even the whole world. We teach our students that they can change the course of history. In fact, life’s journey is a pursuit of that goal.

Students at Herbert W. Armstrong College prove for themselves that the Bible is the infallible authority of God Himself.

What human beings can achieve with their minds is absolutely dazzling. God created us, and He endowed us with brilliant, highly capable minds. So surely He must have also provided some instruction in how to use them successfully.

Yes, He did—in His Word, the Holy Bible.

The Bible is the foundation of all knowledge. You can prove that for yourself. You don’t have to doubt that, and you need not be disturbed by anyone who says otherwise.

Students at Herbert W. Armstrong College prove for themselves that the Bible is the infallible authority of God Himself. The Bible isn’t speculation. It is God speaking to us! And when a person really begins to understand that, it brings security and wonder into his or her life.

The college is now named after Herbert W. Armstrong. Gerald Flurry explains why:

Herbert W. Armstrong was one of the most prominent religious leaders of the 20th century. He was watched, read and followed by millions of people worldwide. At the time of his death in 1986, the newsmagazine he founded, the Plain Truth, was being produced in seven languages; global circulation peaked at 8.4 million. (By comparison, Time magazine’s circulation that year was 5.9 million.)

The name Herbert W. Armstrong College reminds us that there was a powerful work on Earth that God Himself established. It was a work that fulfilled Jesus Christ’s promise to send an individual who would “restore all things”—every foundational doctrine in preparation for His Second Coming, as John the Baptist did before His first coming (Matthew 17:11). …

The name of our college helps us remember what became of that work because people didn’t value it.