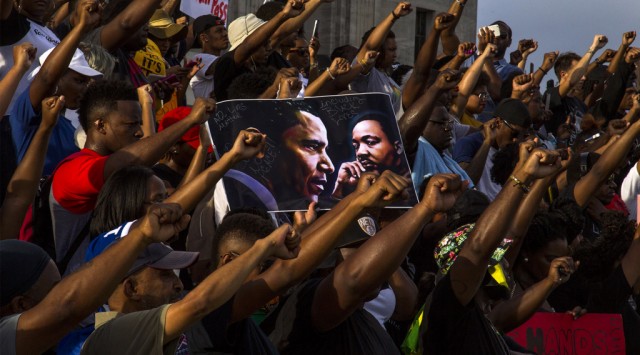 Gerald Flurry’s newest article “America Faces an Explosion of Racial Violence,” which will be featured in the September 2016 print edition of the Philadelphia Trumpet newsmagazine, addresses one of the country’s most urgent domestic problems.

In light of the most recent police assassinations in Dallas, Texas, and Baton Rouge, Louisiana, it is clear that the state of race relations in the United States is in steep decline. Gerald Flurry gives an in-depth analysis on the cause of the race-related woes plaguing the U.S. and what the Bible has to say about the sociopolitical state of America and the West today.

Mr. Flurry explains that much of the problem is actually being fueled by prominent political officials in our country—especially those in Washington. President Barack Obama himself has weighed in on several police shootings in recent years, which has incited more racial division and tension in the country.

The divisive narrative we hear against law enforcement in the media today is leading this country into a state of lawlessness that will only create more problems.

Gerald Flurry wrote, “To call somebody a racist is one of the ugliest accusations you can make in America today, and we should really be careful. To falsely accuse people of racism routinely is a serious problem!”

Since 1992, the Trumpet has been warning about the perils of racial violence that are prophesied to come to America and Britain for their rebellion against God’s law. But we’ve also been proclaiming the good news that these terrible events will soon come to an end when Jesus Christ returns to Earth to abolish all injustice and racism—permanently.

Be sure to read Gerald Flurry’s latest article for insight into a problem that you cannot afford to ignore.